In this post, we’ll show you where is microphone on iPhone 12, 12 Pro, 12 Pro Max and 12 Mini, with the precise microphone location. Microphones are important in any smartphone, whether recording 4K video or FaceTime calls or talking on the ear speaker, without a microphone your iPhone is useless.

It is noteworthy that Apple has allocated several microphones for different purposes, for example, if you shoot videos, the camera microphone will be used, during calls the iPhone will use the microphone next to the Lightning connector, and so on. In addition to software specifications, people often like to learn about hardware specifications such as the camera, microphones, sensors, etc.

Where is Microphone on iPhone 12/iPhone 12 Mini 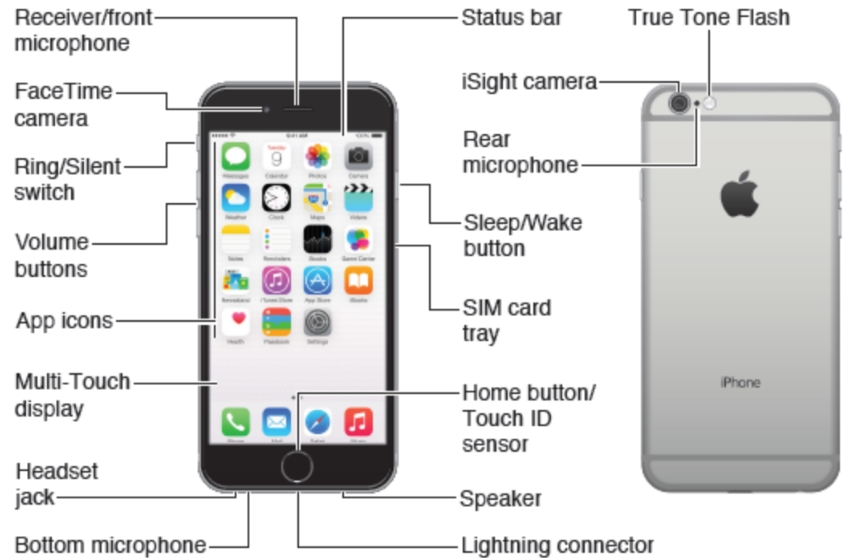 The other microphone is located near the lightning connector on the device. The four microphone holes on the right are the stereo speaker grills, and everything else belongs to the microphone. Not far from the ear speaker is a third microphone, for comfortable hearing when talking on the phone.

The iPhone 12 is considered Apple’s most popular product for a reason. Not only does it boast a gorgeous and compact screen, but the hardware additions aren’t bad either. There are three microphones in the iPhone 12 pro and pro max too, and they too are located in different places.

One of them is near the charging jack of the phone, it is designed to transmit the voice during calls and to increase its clarity. Siri uses a microphone near the ear speaker. That’s where she listens to you and executes your commands. It is quite hard to see, but if you are attentive, you can detect it with ease. And there’s another one near the camera. It records sound while you’re shooting videos on your iPhone.

The name of this feature is telling: while you’re recording your video, this microphone catches the sound and stitches it into your video. Without the camera microphone, you won’t be able to record, and then hear, background music and other people’s voices in the video.

This microphone is designed to control Siri with voice commands, not only is it needed for her, but for a couple of additional functions. When you want to say something to the voice assistant, it automatically turns on and helps you execute commands. 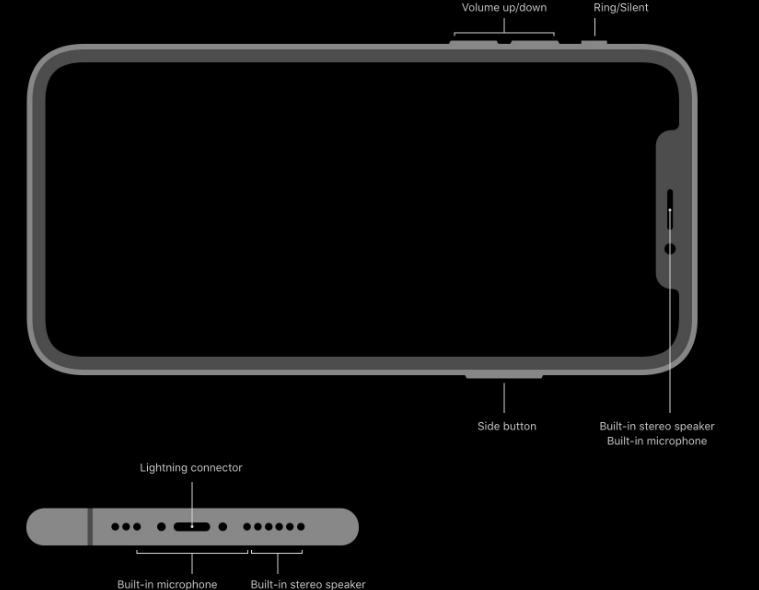 When you call someone, the microphone underneath starts transmitting your voice to the other person, if this microphone breaks or is turned off, you will not be able to convey the information to the person you are calling.

How to Activate the Third Microphone

The third microphone, which is built into the body of the iPhone, is designed to suppress external noise. This feature has been around since iOS 7 and allows you to adjust the status of the third microphone depending on whether or not you need noise cancellation at the moment. This action can improve the call quality.

If you have iOS 13, then go to Settings -> Universal Access -> Audio Visual Material.

Step 2: Scroll down and find.

After activation, you can proceed to the test – call a friend or relative and ask him to evaluate the sound quality. As numerous experiments show it increases.

Problems with iPhone Microphone not Working

Microphone holes are tiny, so clean them with special care. You should use any soft brush (it can be a toothbrush) to thoroughly clean the grills. 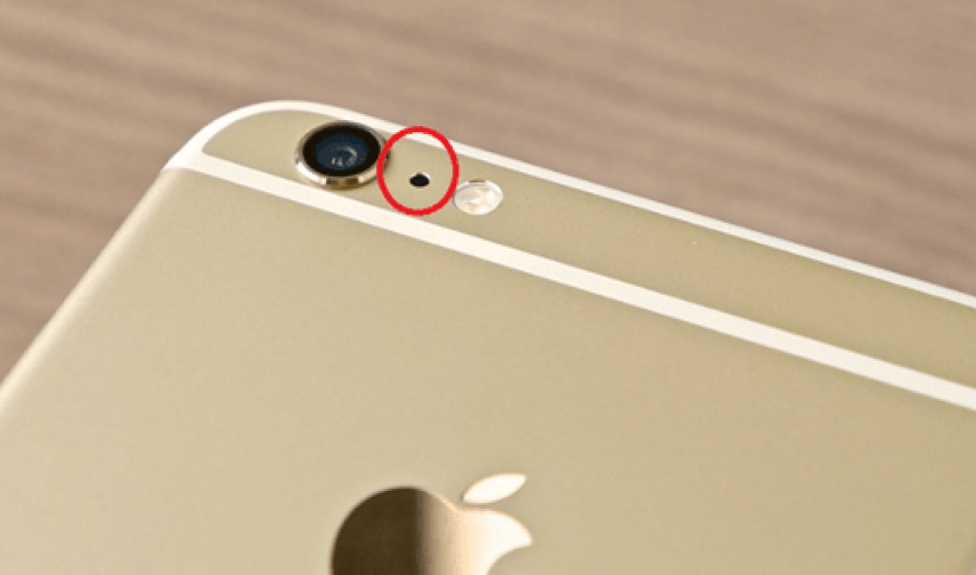 When doing so, hold the iPhone so that gravity does its job. For example, if you are cleaning the bottom microphone, try to hold the phone vertically so that the dirt can easily fall off.

After that, take a few minutes to thoroughly clean the 3.5mm headphone jack or Lightning port.

It’s also very important to make sure that you’re not using a case or screen protector that partially or completely covers the microphone holes. If so, get rid of them.

In the above solutions, we talked about the hardware side of things. But what if the microphones aren’t working because of a temporary software glitch!

The first fix is to reboot the iPhone . Yes! An action as simple as turning the device off and then turning it back on can solve a few minor problems! Here is how to turn off iphone 12 pro max.

To gain access to your iPhone’s microphones, apps need your consent. Usually when you open an app for the first time or perform an action in an app that requires a microphone, you’ll see a pop-up window asking for your permission. 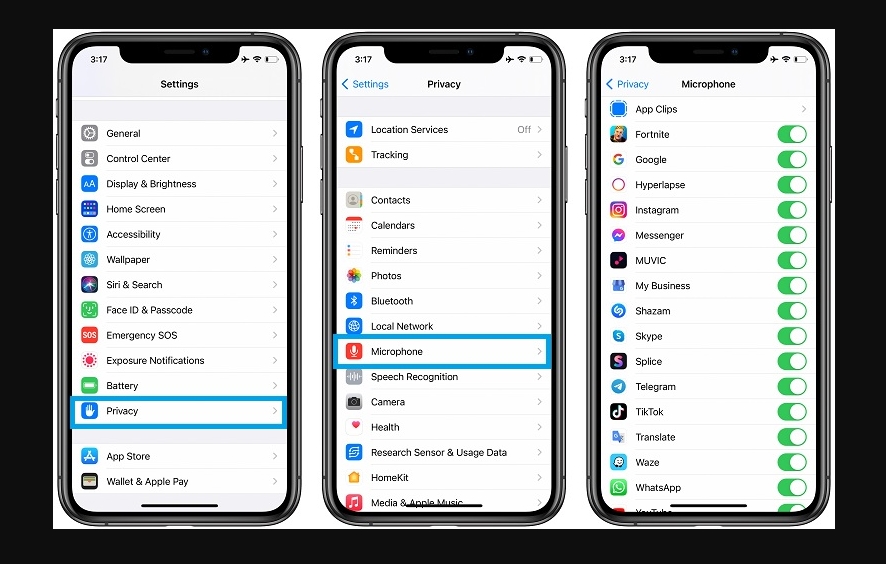 If you select “Do Not Allow,” here’s how to override that decision.

Additional method: you can scroll down to the bottom of the “Settings” app, click on the name of the app and perform the above action.

Then forcibly close the application and restart it.

In this article, you learned where the microphone location on Apple iPhone 12 Models (iPhone 12, iPhone Pro, iPhone mini, iPhone Pro Max) is. There are three different microphones with multiple locations: one is on the bottom of the device, the other mic is located on the top, and the third one, the camera mic, is a tiny hole on the back.
They have different purposes, f.e. phone calls, facetime calls, Siri. The mics perform camera related functions or record sound.

This website uses cookies to improve your experience while you navigate through the website. Out of these, the cookies that are categorized as necessary are stored on your browser as they are essential for the working of basic functionalities of the website. We also use third-party cookies that help us analyze and understand how you use this website. These cookies will be stored in your browser only with your consent. You also have the option to opt-out of these cookies. But opting out of some of these cookies may affect your browsing experience.
Necessary Always Enabled
Necessary cookies are absolutely essential for the website to function properly. This category only includes cookies that ensures basic functionalities and security features of the website. These cookies do not store any personal information.
Non-necessary
Any cookies that may not be particularly necessary for the website to function and is used specifically to collect user personal data via analytics, ads, other embedded contents are termed as non-necessary cookies. It is mandatory to procure user consent prior to running these cookies on your website.
SAVE & ACCEPT
wpDiscuz
0
0
Would love your thoughts, please comment.x
()
x
| Reply
Adblock
detector